Majin Buu has a new chance to defeat his evil counterpart and this time has a new ally alongside him, who's also eager to have his divine powers back.
Will he manage to win, or will be defeated again?

Speed equal.
(I deemed Kid Buu too strong, as the Grand Supreme Kai should logically be inferior to him, but I may rise Super Buu's form if needed) 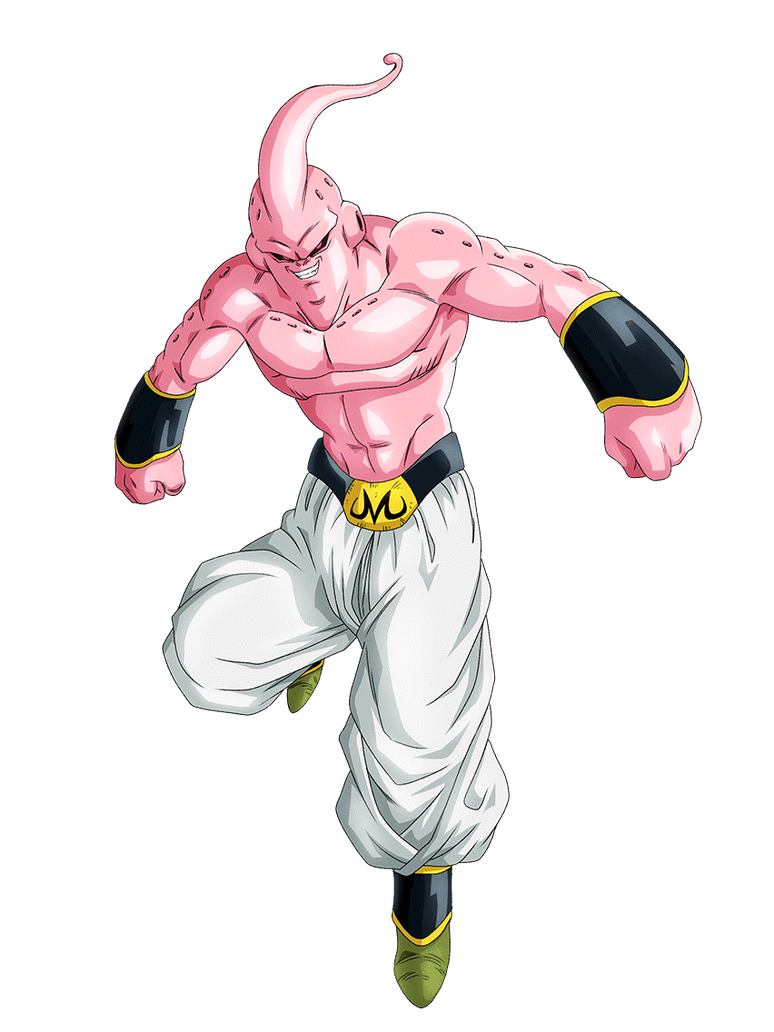 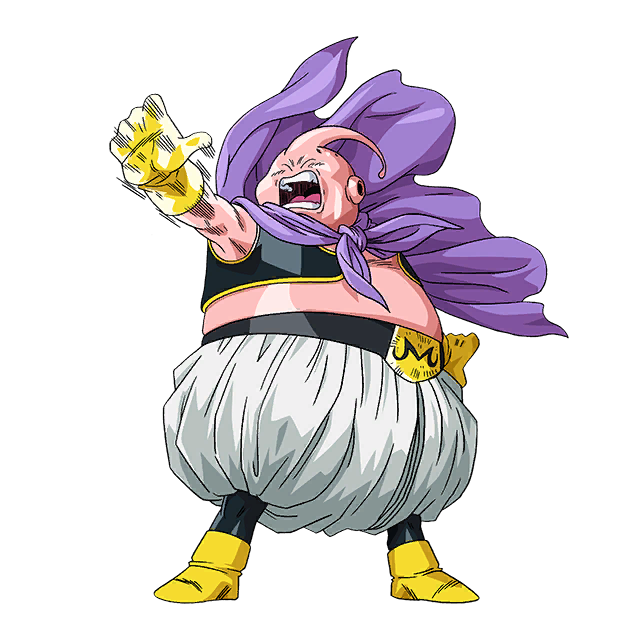 I think chou buu wipes the floor with super buu.

We don't really know how strong Chou Buu is, just more than before but also logically lower than Kid Buu, as the Grand Supreme Kai was unable to defeat him.
And I could upgrade Super Bu to Buutenks, but iirc him and Buhan are stronger than Kid Buu.

Oh then I am going for super buu because he should be comparable to kid buu.

Super Buu is weaker than Kid Buu, as Shin states that Buu got progressively weaker while absorbing the Supreme Kais, trading power for a heart. Super Buu still has the South and Grand Supreme kai inside of him, like Fat Buu, but the evil side is in control.
Once he absorbs Gotenks, he states of having become the strongest Majin that has ever been, technically trumping even Kid Buu (and also the power level stacking supports this).

I agree, he still beats chou buu though because good buu is the weakest buu because fat buu split to evil buu and good buu and evil buu had most of the power.

Chou Buu has the Grand Supreme Kai's power inside of him, which made him stronger than before, likely to a fairly good extent.
This Buu also upscales from ssj Chou Goku, who could possibly contend with Kid Buu (that's far from making them even, as he fought with him as a ssj3 despite being weaker, but it's still a suggestion of his power).
Overall, there shouldn't be a huge difference in power between Super and Chou Buu, imho.

Ok the scaling is confusing and I am very conflicted. So I think betting on super buu would be safer because we don't know how much stronger SSJ1 goku has become over the course of super.

I'm pretty sure Super Buu is stronger than Kid Buu.

Kid Buu is on par with regular SSJ3 Goku and weaker than Full Power SSJ3 Goku, as Goku believes he can eliminate Kid Buu if he finishes their fight quickly. Kid Buu beats Regular SSJ3 Goku because he has infinite stamina and Mid-High regen while Goku in his Super Saiyan 3 will quickly exhaust him.

Super Buu is also comparable to SSJ3 Gotenks, who is much stronger than SSJ3 Goku. Kid Buu vs. Super Buu might be an AP stomp for the latter.

I wouldn't turn this thread into a pseud-CRT, but Super Buu still had inside of him the two kais, which Shin stated made him weaker, and Buu himself states of having become the strongest Majin only after absorbing Gotenks.

Ssj3 Goku needs to charge power for well over a minute in order to defeat him, and he ultimately fails in doing it, after stating that Boo is just toying with them.
And the same ssj3 Goku kinda on par with the original Fat Bu.

Buu saga's power levels are inconsistent, due to Toriyama's bad writing, but I think there are enough evidences to say that base Super Buu isn't stronger than the Kid, even after Shin's statement, which is the one of the last inputs given at a time in which Tory used to make up the story on the fly week after week.

Statements from Shin seem to imply that Kid Buu is the stronger one (I'm not sure about it tbh, it seems like he's saying that Kid Buu is just more dangerous). I think there are more feats and showings that say Kid Buu is weaker than Super Buu. The wiki currently scaling chain in the Buu Saga seems to put Super Buu above Kid Buu to a massive extent that is way enough for an AP stomp.

As for this match, I have to vote incon here because we don't really know how strong Chou Buu is compared to Super Buu. My headcanon says Chou Buu is stronger anyways. However; if we lack evidence for that, voting incon could be best.

Seems weird. Why is Moro and Buu scaled to SS Goku and Vegeta when Moro fought SSG Vegeta and landed hits on him? He even took a hit from Perfected SSB? or SSBE? Then you have Buu himself saying that Moro was a weakling compared to him and this is after Moro got stronger.

Yeah that confused me too.^

Shin specifically mentions power, though. And technically Chou Buu should be inferior to Kid Buu, since the Grand Supreme Kai couldn't defeat him.
Anyway, incon counted.

Moro took blows, yes, but that doesn't mean he is comparable to them, as Goku and Vegeta state that in ssj blue form they are still stronger than Moro even after he recovered his original powers, which made him superior to Buu, who was stronger than Moro with the powers sealed.
It's magic that made Moro dangerous, as he could absorb energy and wound Vegeta with planet energy.

I think Chou buu should win but super buu is more likely to be stronger.

Just saying that strength isn't the only factor to grant a win.
Anyway, vote counted.

Didn't the Supreme Kai sealed off most of his power after he fought Moro?

That would explain why he was beaten by Kid Buu. Also Shin's statement likely only really applies to Fat Buu, who is indeed weaker than Kid Buu (but can still somewhat fight him for a while)

Super Buu (as Buuhan) even forced Goku and Vegeta to use the potara earrings to fuse into Vegito, however Goku was confident that he's able to take him on his owm when he turned into Kid Buu

As for Super Buu VS Chou Buu, I'm leaning toward Chou Buu here due to how much stronger everyone got since the Buu Saga. Especially during the Black Saga, where they got from SSB Goku/Vegeta < SSJ Black to SSB Vegeta > SSJR Black. Which is a massive increase in power. So:

It is kind of unknown if he lost only his divine powers or even raw strength, but that's not relevant, as Buu inherited the power of the Dai Kaio without said powers.

Shin was referring first to Buff Buu and then to Fat Buu, yes, but Super Buu still has both Kais inside influencing him, in fact he reverts to Kid Buu once Fat Buu gets deattached from himself.

Buutenks and Buhan though are indeed stronger than Kid Buu, Buutenks himself says it (and he is aware of Kid Buu's existence).

But your vote is valid anyway.

(I was so sure they would have been somewhat even in power, and that raw strength wouldn't have had that much importance)

SamanPatou said:
It is kind of unknown if he lost only his divine powers or even raw strength, but that's not relevant, as Buu inherited the power of the Dai Kaio without said powers.

Shin was referring first to Buff Buu and then to Fat Buu, yes, but Super Buu still has both Kais inside influencing him, in fact he reverts to Kid Buu once Fat Buu gets deattached from himself.

Buutenks and Buhan though are indeed stronger than Kid Buu, Buutenks himself says it (and he is aware of Kid Buu's existence).

But your vote is valid anyway.

(I was so sure they would have been somewhat even in power, and that raw strength wouldn't have had that much importance)
Click to expand...

Super Buu uses Candy Beams in characters and has mid high regen too, so it's not a stomp or something

Both Buus have regen, but that's nulled (after awhile), as Majins can be worn out by fighting each other.

Im guessing Moro Arc Buu so So Moro Arc for the win.

That thing happened only in the anime, it doesn't scale to manga Buu.

Grace has ended and Chou Buu achieved the victory againts his evil self, saving the Earth and returning the godly powers to the Grand Supreme Kai.

gg
You must log in or register to reply here.