"I say a certain tamper of the creational portals couldn't hurt, As promised, I will be ever so vigilantly ready... to receive that one holler for help. I just have to help..."

Plot: In a universe surprisingly not far from ours, a massive warped hole appeared in the skies which had an even more massive structure arrived big enough that it can be seen at a far distance including a loud horn that followed that struck the Acapulco coastlines. A woman's voice high above shouts the words for the whole world to hear mockingly saying the phrase "OH!! NOW WHO CAN HELP ME NOW?!!" Not long afterwards from below out of nowhere, the appearance of a red hued hooded antenna man bearing a symbolic yellow heart and lettering 'C H' wielding a big hammer triumphally jumps forth saying "YO!!--Digo (switches it to English) ME!! (Just imagine real hard of an English dub with one of Tom Kenny's performances that are not so high pitched)" Standing there posing, waiting for somebody to say his name so he can then follow up with "They couldn't count on my cunning! follow me the good ones!!"... But is soon confused not knowing who summoned him, even more so with the behemoth machine standing before him that via his antennas detected extremely toxic poison of advanced extraterrestrial origin.

Then the man's antennas captured something else, ringing loudly
"Silence! silence! My vinyl antennas are detecting the presence of the enemy!"

a shadowy figure is finally seen in the ledge of the colossal artifact as the same voice earlier belonging to it says "Hey you, (Cosmic Dolphin noise)!! Are you Chaplent Coleradi or whatever the heck the name was??!" Turning around he finally introduces himself "W-Well actually young lady my name is CHA-PU-LIN CO-LO-RA-DOH... Or The Red Grasshopper for you English speakers out there (Clears throat) I'm a Super Hero and as such I would like to know are you the one who summoned me, and could you please tell me who is responsible for this... This g-g-giant n-needled thing??"

"... (scoffs) ''Super Hero'', I still recognize that awkward youthful dopey red aspect from anywhere even after so many years somehow, No matta' ... its clearly him..."

The figure descends right next to the red super hero... Revealing herself to be of lanky stature, covered in a red/purple-ish hue with long wild bushy red twin hairs, bearing an upside down purple hued jeweled heart and almost resembling an old cartoon character, She stood there in the position of one too no short of being accompanied with a large smile that did give Grasshopper a strange deja vu... But this was far from a benevolent greeting "Hey buddy! Chum! ǝ̶ɓ̶u̶ɐ̶ɹ̶o̶ ̶ɟ̶l̶ɐ̶ɥ̶ ̶ʎ̶ɯ̶ Pal! Do you remember me 'Grasshopper'??! Come on you remember RIIIGHT??" She says girthing her teeth from which the smile lies rage... But given his naïve nobility the situation wasn't as clear to The Red Grasshopper as he is initially baffled, but says "...Actually, You do remind me a fun going lady that summoned me from another universe different from this one!...Good times, It was very VERY long ago come to think of it, from a weird alien race of versatile colorful rock aliens almost like the ones I dealt with in Venus... Huh actually its been a while since I visited come to think of i--" He's cut short with a loud "3,000 YEARS TO BE EXACT!! I remember it so clearly and yet you seemingly don't!" Scaring the red superhero "Calm down! Calm down! Remain calm! Pobody Nanic! Let me make sense of this... uh huh... stance, shiny....Heart shaped rock in the chest area... Wait Wait Spinel? Is that really you?? Chanfle! you changed a lot since the last time I saw you but it's truly nice to see y--" He then gets flattened hard into a dust crater, dust cleared and he appears to be in a crushed paper shape "Oh you're happy to see me huh?? How can you say that to a best friend abandoned for another FUCKING MILLENNIUM!!??" Grasshopper dazingly yet so suddenly reforms himself initially surprising Spinel but kept her guard up.

"W-W-Wait... Where did the Dolphin sound effect go?..." Spinel shows confusion in Grasshopper's slight 4th wall awareness (Lets just hope she doesn't break it in the beyond future), This of course not knowing the situation made her even more irritable "(Fixes back area) Ah! I'm gonna feel that in the morning!... P-Pardon me, what I mean to say is please listen to me! There has to be some form of misunderstanding! actually come to think of it more... I'm very surprised as to how you had arriving accessibility here its rather far! I seriously do apologize for whatever I did but in my Superhero opinion I think we should just cool down first an--" She was still not listening as she attempts to clap him once more, Grasshopper leaps out of her attacks albeit with much effort given her dynamic octopus like extending body made him barely stick a landing, She quickly grabbed the red cicada with her over inflated hands as he actually struggled to budge out of her vice like grip "Yeah yeah I'll flout to that, let me guess "I did this intentionally, all of my moves are coldly calculated" I still remember those words I'll have you coldly calculated alright, I have a new game we could play short stack! You're a ''Legendary Superhero'' as its boasted right?? PROVE TO ME YOU CAN STOP ME AND THIS GIANT NEEDLED THING THEN!! You broke my heart Grasshopper and now I am gonna shatter that pathetic shielding of yours!! You think you have the heart?... SHOW ME." She was trying to crush him hard again, and that's when the Grasshopper disappears out of her grasps and right behind her still slightly flabbergasted by... Whatever Grasshopper just did, trying to recover his breath nervously stating "W-Well yeah, of course, I'm not one of those 'Que bruto que valiente es este cuate!?' type... But yeah I have more heart then one would think!" she was bracing herself for another punch, this is not what he meant by heart but for now he couldn't come up with anything so he shyly and reluctantly readies himself:


Grasshopper a bit shaken by her anger couldn't currently say anything more but "...They take advantage of my nobility... Very well. You came here for a fight Spinel? You got one from yours truly! follow me the good ones!" As he tries to muster the best on guard position he confidently could... Albeit still goofily reluctant as he is rightfully intimidated by beady red eyes and twisted large smile of what once was a presume friend, But then, he knew what he had to do...

Will the Red Grasshopper prevail in solving this heaty predicament while also turn the clock back to this calamity? Or will his universe's Earth be but a forgotten withered memory?? Let's find out...Now!


(Yes, free time was something alright cut me a bit of slack. I had sort of a... Special emphasis on this one.)

Both are at a same tier (Fun and Games/'What if' purposes of course).
Speed Equalized (If it wasn't already equal enough in an F&G!).
Battle takes place in a withered area of Acapulco. 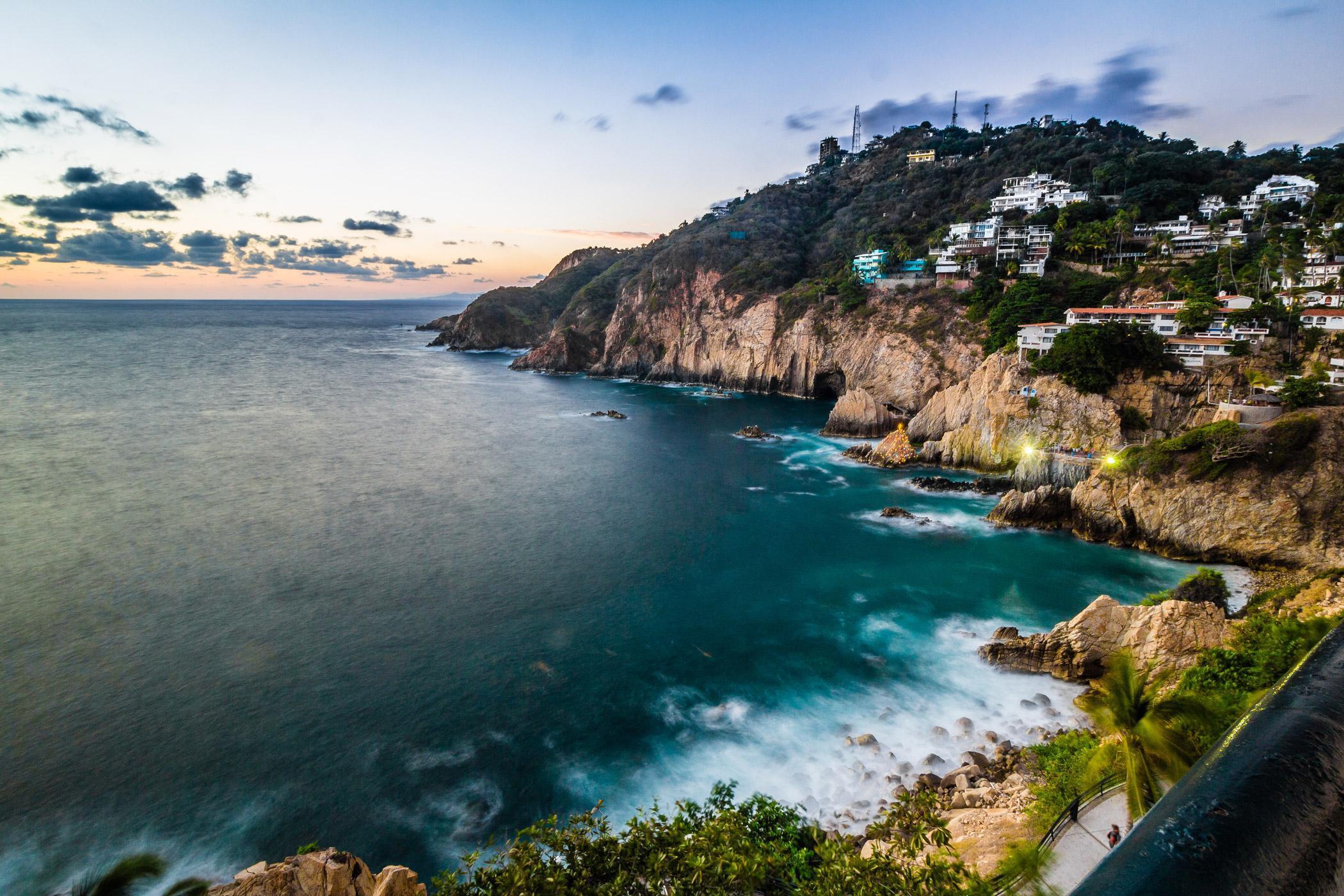 (Cue thematic)
Standing around 5,4 (His live action counterpart was played by the creator himself after all, An inch smaller then me actually. in the series, Grasshopper's little mac stature like height is also a slight running gag.).
Despite not being the most handsome and graceful of superhero's, he still has a great heart saving the lives of countless many people throughout history (literally throughout history, Even after the introduction the pirates ghost recognizes the Red Grasshopper despite his literal 17th centaury age.) This funny red insect man still has more up his sleeves then one would think, including translating any language in the universe minus the ones from critics!
He's More agile then a Ninja Turtle! Far stronger then the Super Mouse! More noble then the most substantial lettuce! His greatest shield/coat of arms of all IS HIS HEART! 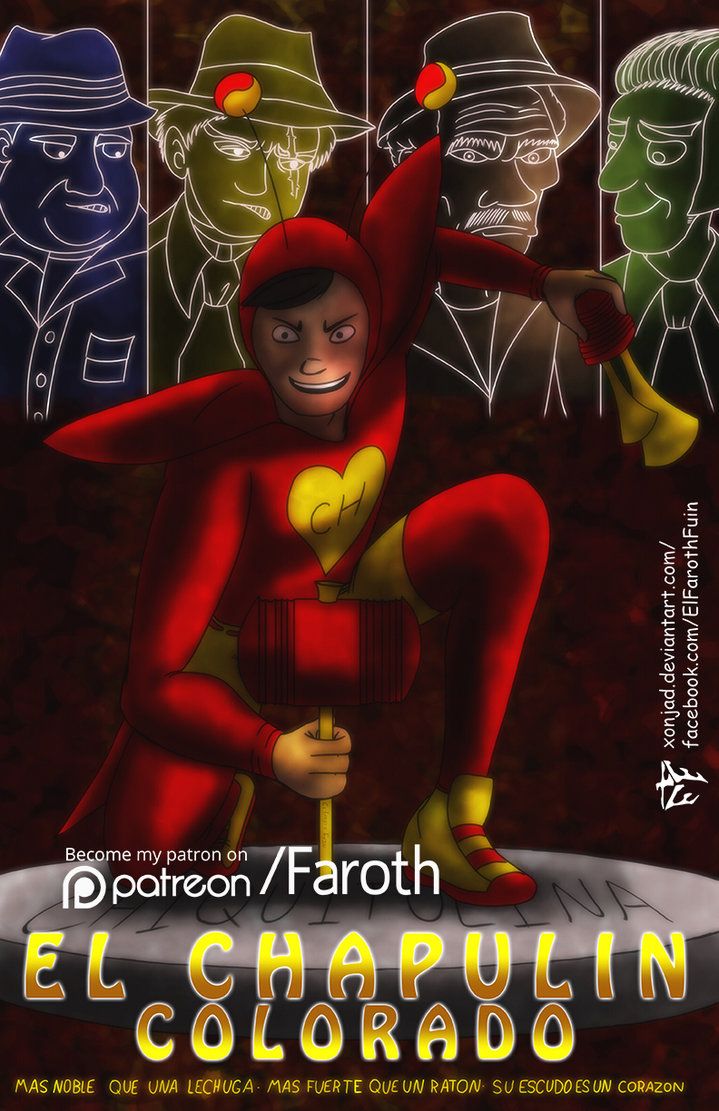 (theme)
(If memory serves) Standing around 5,3! (Or unless this has changed, in certain other areas... She's taller then Steven surprisingly? Steven is around 5'5-5'6, It is at times hard to tell given her gum gum fruit gem physiology.)
Initially created for the sole purpose to entertain and be a forever loyal friend! Now apparently determined more then ever to squash the world! Don't let her skinny appearance fool you, Doll's still a real REAL KNOCKOUT even through so many years.
Finally here to settle an old debt to an old friend?


His Best Frenemy Spinel is here!​

(She still has a good heart somewhere! He just has to find it!)​ 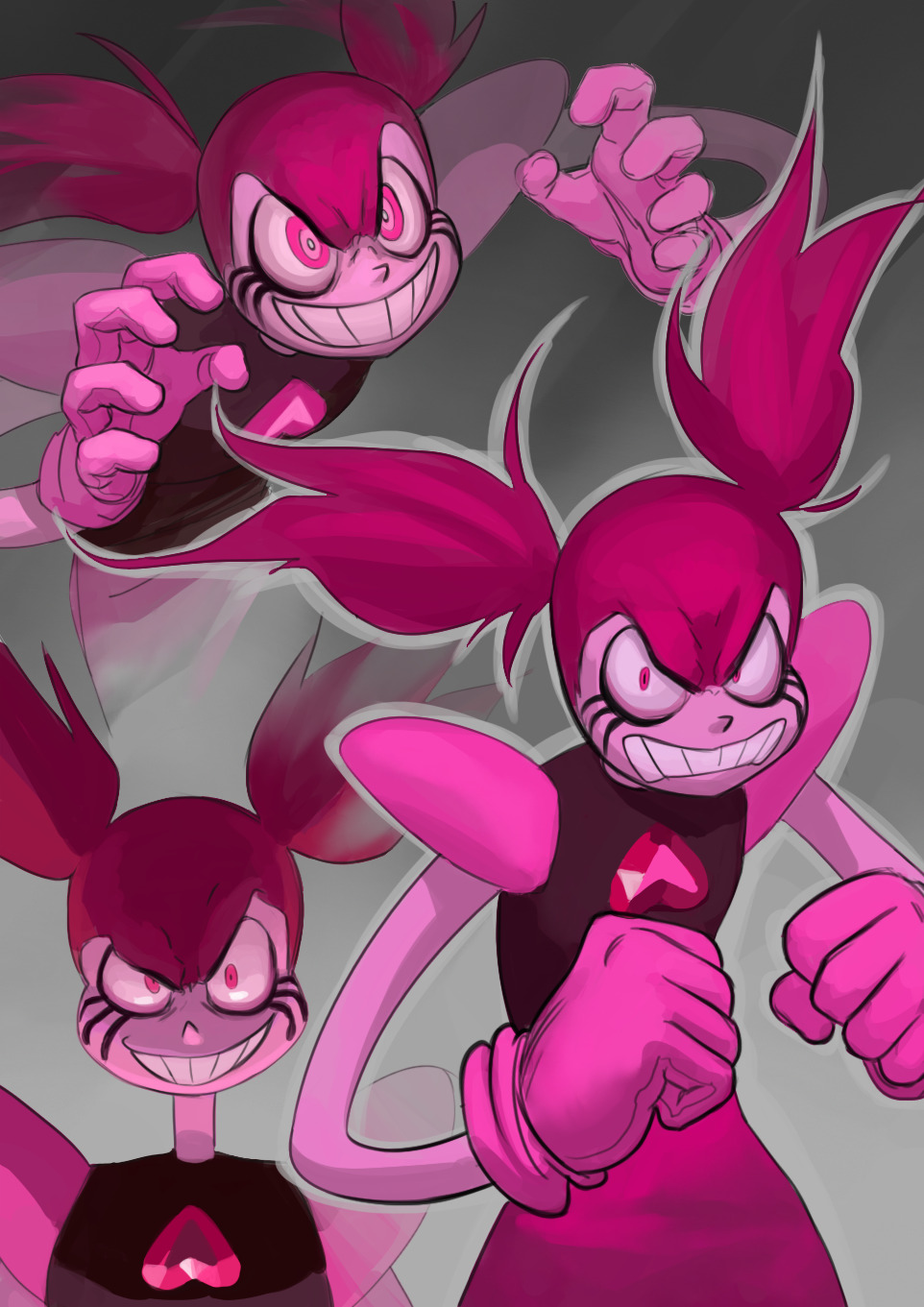 "Wow! I knew I was gonna set you back, but this is how you started? "The legend"? HAHAHAHA! You gotta be kidding me! How did a powerless loser like you become savior of anything?!"​

(Even in an Alternative Universe, the context could still make the more sense at least for those that relatively know Grasshopper's/Chapulin's character, You'll sorta get the gist for those that don't know who he is.)

Music as the onslaught truly begins and it may not be the one you'd think!

- The reason for the location of Acapulco was that Grasshopper did not just have some episode in the Acapulco beach but it did seem the most Deja Vu fitting place from where Spinel had her injector being somewhere while not directly in Acapulco, IS somewhere in the coastlines of SU's verse if I recall.

- Given the Red Grasshopper's history being literally in the most absurd situations/requests, It's actually highly likely the guy could theoretically crossover with nearly anything, he also had several alien encounters as well! here's him having a conversation with actual extraterrestrial rocks from Venus which he later found out to use later and fly above the planet via using his mind, way before Sponge Bob would consider it a possibility.

- And after doing a recall on both characters aside differentiating roles in life while both have not just somewhat strikingly similar appearances but funnily enough they both represent symbols of goodwill of sorts. Grasshoppers are said that they can bring happiness even wealth as they are usually associated with money as well, a grasshopper is usually perceived as a lucky symbol all over the world as It symbolizes not only abundance and wealth but also freedom, balance, creativity and peace. And in gemology Spinel's represent positivity, wealth and happiness as well... Makes you think doesn't it?

- I was going to draw something to fit, but it would have taken longer (But the Mario and Luigi Superstar battle system gave me an idea), So I found these.
Last edited: Feb 27, 2021

Bumperino, At last it seems.

Bumperino infiniterino.
You must log in or register to reply here.

Thanos (With the Heart of The Universe) Downgrade
2 3