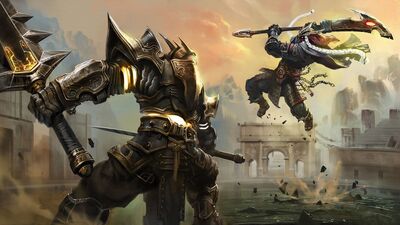 Sixth Round of the 9-A Brackets begins! Our contestants for this round are Eternal Warrior (Reboot), and King Arthur (Legend of the Sword). Click here to see current standings.

Arthur has Excalibur. Speed is Equalized; IDK how big the gap is but Subsonic+ to Subsonic worries me enough. Before ya'll jump on Regen and Resurrection, it isn't combat applicable. 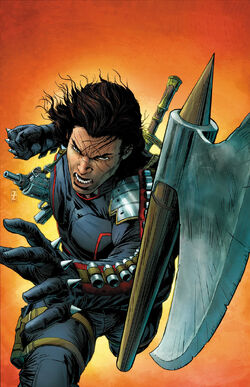 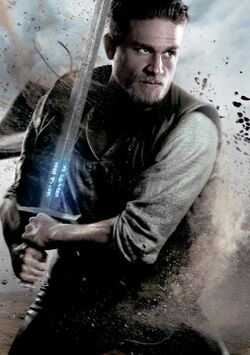 Don't mind me, I just don't have the presence of mind right now to think. So I'll just retreat to the shadows and lurk.

Eternal Warrior seems to be much more skilled; is Arthur's Precognition useful in combat?

Paulo.junior.969 said:
Eternal Warrior seems to be much more skilled; is Arthur's Precognition useful in combat?
Click to expand...

From the looks of it, yes, very much so. (EDIT): But I don't know if that required prep.

If the precog results in a stomp, I'm probably going to unequalize speed.

Tfw I legt didn't see the part where he used Precog in the video you sent. Seriously, when did he use it on that? I think missed it.

Paulo.junior.969 said:
Tfw I legt didn't see the part where he used Precog in the video you sent. Seriously, when did he use it on that? I think missed it.
Click to expand...

Notice how after he gets knocked down and is seemingly defeated, he gets back up? After he gets up, the guy he's fighting turns around to meet him for the first time. Everything before that was his precog.

Oh, I didn't notice that. That seems to be pretty good precog, has Eternal Warrior ever delt with something like this before?

Paulo.junior.969 said:
Oh, I didn't notice that. That seems to be pretty good precog, has Eternal Warrior ever delt with something like this before?
Click to expand...

I'd wait for Antoniofer to come on here; he knows much more on the Eternal Warrior than I.

Curiosly enough, by order of the Geomancer, Gilad helped Arthur to becomes king, it was also member of the round table, their brothers also served Arthur, Ivar was even Merlin... Turn out Gilad was tricked by a fake Geomancer, so he started a war against Arthur with Arthur's sister (the true Geomancer) as her ally.

Anyway, it seems like Arthur surpass Gilad with precogn and has advantage with Excalibur; meanwhile Gilad is more skilled, experienced and, afaik, intelligent, plus he has regen. About Gilad, he has deal with magical and suoernatural beings before, including aliens, but the most similar to deal with enemies with precogn is against Ninjak, but is not at the same level as Arthur's.

So it looks like Arthur has the advantage with precog and his magic, but Gilad is much superior to him in regards to skill and even experience.

I'd personally give it to Arthur with high difficulty; he has used his precog to close skill gaps such as the one with Vortigern, and I feel like eventually the ranged shockwave generation will trip up Gilad. That said, Arthur would have to use his precog like a crutch, as Gilad would likely decimate him in melee combat on any day of the week.

Arthur's precog allows him to take this.The EW simply can't match it, even though he can fight it. It's still a low-to-mid difficulty victory for Arthur.


Anton, I don't know if your post had a verdict; so I'll wait until you confirm who you were voting for/if you weren't voting for anyone in particular.

This is bascally broken skill Vs broken precog; I honestly have no idea who wins.

Ni, I haven't give my vote yet: that pregcon is difficult to counter since apparently it gives you the most possible outcome; however, is difficult to prevent the moves of someone with over 500 means of combat, with high stamina and regen. I'll wait for more input.

Someone with so much battle experience and who knows so many fighting styles should be able to adapt and change his strategy once he notices the opponent knows what he is going to do, but what if Arthur foresees that as well? Antoniofer said Eternal Warrior has delt with Precog before, but not on this level, so I'm not sure, and they both have "several meters" of range, making things even more complicated.

You can count me as inconclusive if you want, I really have no idea how this thing would end.

Welp, Ninjak precog isn't similar to Arthur's at all, he works more like predicting opponent's moves rather to see the future; the time that Gilad stomped him (along with X-O Manowar, GIN-GR and Livewire) is cuz they were in his ground and exploded their weaknesses. That's it, Gilad is capable to defeat beings far stronger than him due being tactical, including the ones from above, and the rulers of the Hellscape.

Welp, since no new rasoning has been added, I'm going to vote inconclusive, at least for now.

Question: what woukd happen if the match end being inconclusive? The match is still added, but what would happen in the tourtament?

I'd have a bonus round in fun and games.

Although I'm open to other suggestions, as I doubt that would be very successful.

The bonus round uses memes

Inconclusive for reasons above

Woohoo! Grace begins, next round will be up soon.

Best way to know which one will fight Spider-Man.